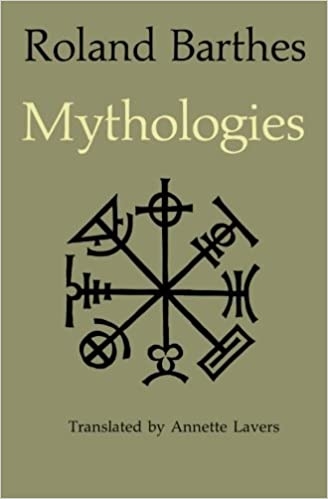 "[Mythologies] illustrates the beautiful generosity of Barthes's progressive interest in the meaning (his word is signification) of practically everything around him, not only the books and paintings of high art, but also the slogans, trivia, toys, food, and popular rituals (cruises, striptease, eating, wrestling matches) of contemporary life . . . For Barthes, words and objects have in common the organized capacity to say something; at the same time, since they are signs, words and objects have the bad faith always to appear natural to their consumer, as if what they say is eternal, true, necessary, instead of arbitrary, made, contingent. Mythologies finds Barthes revealing the fashioned systems of ideas that make it possible, for example, for 'Einstein's brain' to stand for, be the myth of, 'a genius so lacking in magic that one speaks about his thought as a functional labor analogous to the mechanical making of sausages.' Each of the little essays in this book wrenches a definition out of a common but constructed object, making the object speak its hidden, but ever-so-present, reservoir of manufactured sense."--Edward W. Said

Teacher, man of letters, moralist, philospher of culture, connoisseur of strong ideas, protean autobiographer . . . of all the intellectual notables who have emerged since World War II in France, Roland Barthes is the one whose work I am most certain will endure (Susan Sontag)

One of the great public teachers of our time, someone who thought out, argued for, and made available serveral steps in a penetrating reflection on language sign systems, texts --and what they have to tell us about the concept of being human. (Peter Brooks)

This new edition brings into English for the first time all of the essays in the groundbreaking Mythologies by French semiotician and critic Barthes, translated by the redoubtable Howard (Flowers of Evil), and joins them with Lavers's earlier translation of Barthes's accompanying analytical essay, "Myth Today." Barthes examined mass culture, its ads and hidden or disguised messages, its icons and politics, its desperate speed in the mid-1950s. With several exceptions, these pensées are in delectable, bite-sized pieces. Though very much of their time, these essays tell us a lot about how we might intellectually navigate our own century. When the specifics are unfamiliar to a non-French reader, unobtrusive and cogent notes identify the individuals and issues. By framing the mythic in the quotidian, Barthes examines everything from detergent ("dirt is a sickly little enemy which flees from good clean linens at the first sign of Omo's judgment") to professional wrestling ("Wrestling is not a sport, it is a spectacle"), Garbo's face ("virtually sexless, without being at all 'dubious'"), Billy Graham, the Tour de France, a French striptease, plastics, and onward. With so much new material now included, this volume is not an unabridged reissue so much as a celebration anew. (Publishers Weekly)

An abridged English translation of Mythologies (1957), one of Barthes's most famous books, has been available since 1972, but it omitted 25 of the original essays, included here. Overall, Barthes (1915-80) argues in these diverse pieces, both the newly available and the others, that many customs accepted as a matter of course are in fact narratives that disclose their meaning under close analysis. He considers, among other subjects, professional wrestling, maintaining that each gesture has its place in a story. Likewise, why do astrology columns offer advice on particular subjects (this is one of the newly available essays)? What is the significance of Greta Garbo's face? The book has a political dimension; one of Barthes's principal targets is the petit-bourgeois movement of Pierre Poujade. Many essays concentrate on aspects of French life in the 1950s. Aside from these, the book includes a long theoretical section, still in the original English translation by Annette Lavers, in which Barthes explains his approach to myth, stressing the affinities of myth and language. VERDICT Barthes was one of the major French critics of the 20th century, and this fuller translation will be of interest to English-speaking students of French and comparative literature as well as to cultural anthropologists. (Library Journal)

A new edition of landmark work. As this new translation and expansion of a seminal work by the French semiotician and philosopher demonstrates, Barthes remains ahead of his time, and our time, more than 30 years after his death. His impact extends well beyond those who actually read his work (as the pivotal role his ideas hold in the latest Jeffrey Eugenides novel, The Marriage Plot, makes plain). His third book, published in 1957, provides a key to that influence, though early translations included around half or less of the 53 essays here (one of them, "Astrology," receiving its first English translation for American publication). The book has two parts. The first comprises the short essays, translated by Richard Howard, that show the philosopher-critic illuminating the mythic in everyday manifestations of culture ranging from striptease to pro wrestling to red wine to children's toys ("usually toys of imitation, meant to make child users, not creative children"). Where those pieces can occasionally read like journalism (on a very high intellectual level), the second part, "Myth Today," which retains the 1972 translation, provides the philosophical underpinnings of meaning as a social construct and myth as man-made, fluid rather than fixed ("there is no fixity in mythical concepts: they can come into being, alter, disintegrate, disappear completely"). For Barthes, so much of what is accepted as reality is simply perception, shaped and even distorted by the social constructs of language, myth and meaning. Amid the high-powered theorizing, some of his pronouncements require no academic explanation: "If God is really speaking through Dr. [Billy] Graham's mouth, it must be acknowledged that God is quite stupid: the Message stuns us by its platitude, its childishness." It's remarkable that essays written more than a half-century ago, on another continent, should seem not merely pertinent but prescient in regard to the course of contemporary American culture. (Kirkus Reviews)

Roland Barthes was born in 1915 and studied French literature and the classics at the University of Paris. After teaching French at universities in Romania and Egypt, he joined the Centre National de Recherche Scientifique, where he devoted himself to research in sociology and lexicology. He was a professor at the College de France until his death in 1980.

The Nature of Fiction

Everything I Know about Love : A Memoir

The Art of Fiction : Illustrated from Classic and Modern Texts

The Art of the Personal Essay : An Anthology from the Classical Era to the Present

Feminists Don't Wear Pink and Other Lies: Amazing Women on What the F-Word Means to Them