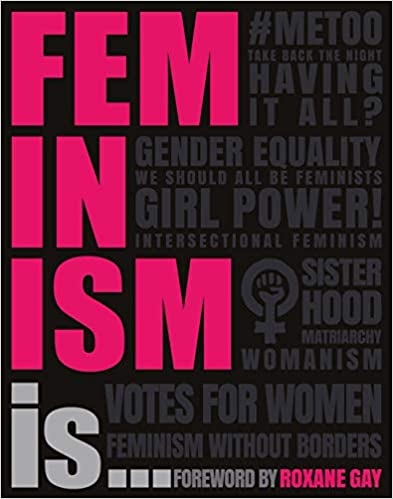 "This book is something I wish I could have read when I was younger." --Roxane Gay, from the foreword of Feminism Is...

It didn't just start with #MeToo. Today's feminism is more diverse than ever before and asks all kinds of questions. Combining insightful text with graphic illustrations, Feminism Is...tackles topics including intersectionality, the gender pay gap, the male gaze, and mansplaining.

Find out what equality for women really means, get a short history of feminism, and take a look at the concerns affecting women at work, in the home, and around sex and identity. Get answers to the big issues and meet some of the most groundbreaking feminists like Audre Lorde and bell hooks.

Addressing ongoing feminist concerns and including an original foreword by Roxane Gay, Feminism Is... takes on important themes in informative, thought-provoking ways.

Roxane Gay is a writer, editor, professor, and commentator. She is the foreword writer of our new book Feminism Is... She is a force to be reckoned with, and so we did. We talked with Roxane Gay about what feminism is, her advice for women of all ages, and what excites her most about the future of feminism.

2. As the title of the book suggests, feminism encompasses many ideas. If you had to finish the sentence, what would you say "feminism is..."?

Feminism is not something we need to continuously define and redefine, particularly for people who willfully choose not to understand something so basic.

3. What excites you most about the next generation and the future of feminism?

I am most excited by how slowly but surely, intersectionality is becoming intrinsic to feminism, as it should be.

4. What advice would you give to a teenager who wants to begin advocating for feminism in their own community? Where is a good place to start?

Advocating for feminism begins by being the kind of feminist you want to see in the world, leading by example. You don’t need to be a perfect feminist. You just need to model what feminism is through actions, as best you can, as consistently as you can. Start by never apologizing for being who you are.

5. What advice would you give to women of all ages about advocating for fair and equal pay, both personally and for their sisters?

Women deserve equal pay for equal work and one step toward achieving that is more transparency about income. Share what you make with other women and men. Bargain collectively. Ask the men in your professional life to demand that their women coworkers are paid equally. But really, transparency is key. One of the main reasons the wage gap persists is because employers count on secrecy about compensation. If they keep everyone in the dark, no one knows if they are being underpaid.

6. There are a lot of books out there on feminism. What's your take on what makes Feminism Is... different from some of the others?

Feminism Is… is written specifically for a young adult audience. It takes the complexities of intersectional feminism and makes them accessible without compromising the rigor of the ideas being communicated. This book is also fantastic because it covers such a broad range of topics. It really shows the importance of feminism in every aspect of our lives.

7. If your 13-year-old self had a chance to read Feminism Is..., which part of the book do you think would have meant the most at that age?

My 13-year-old self would have appreciated the book as a whole. I didn’t even know feminism was a thing at that age. I would have loved something like this, because I have always loved learning.

8. As the book points out, feminism does not have as strong of a presence in some parts of the world as it does in North America. What advice would you give a young woman moving to North America from another country in her early teens?

I would tell a young woman moving to North America that she should be herself and that she doesn’t have to abandon her identity, her culture, or her pride in where she comes from to live and thrive here. The people she encounters here will have as much they can learn from her as she can learn from them.

9. You mention in the foreword of the book that your parents were very supportive through your childhood. Would you have any tips you could suggest that parents could use to encourage their children to embrace feminism at a young age and stay independent of gender roles?

My parents always modeled how people should be in the world, and how men and women should treat one another. The best thing parents can do is show their children what it means to love and live well.

10. Do you think living in the age of social media makes feminism a more challenging proposition, or has it made it easier to spread the message of women's rights?

Social media can be toxic, but more often than not, it is a great way of communicating important messages to a large and diverse audience. It does more good than we give it credit for.

The Everything Store: Jeff Bezos and the Age of Amazon

The Man Who Solved the Market : How Jim Simons Launched the Quant Revolution

Human, All Too Human (Parts I and II)