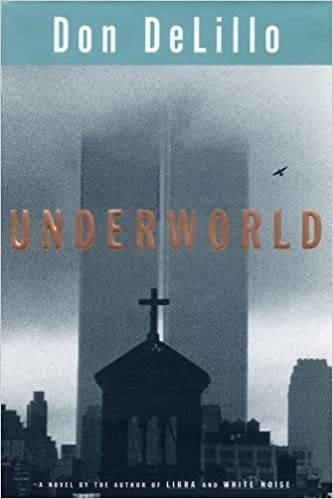 A monumental work combining fiction and history in a collaboration that encompasses fifty years gives readers a glimpse into the realities upon which America's modern culture is based and explores the complex relationship between "waste analyst" Nick Shay and artist Klara Sax.

While Eisenstein documented the forces of totalitarianism and Stalinism upon the faces of the Russian peoples, DeLillo offers a stunning, at times overwhelming, document of the twin forces of the cold war and American culture, compelling that "swerve from evenness" in which he finds events and people both wondrous and horrifying. Underworld opens with a breathlessly graceful prologue set during the final game of the Giants-Dodgers pennant race in 1951. Written in what DeLillo calls "super-omniscience" the sentences sweep from young Cotter Martin as he jumps the gate to the press box, soars over the radio waves, runs out to the diamond, slides in on a fast ball, pops into the stands where J. Edgar Hoover is sitting with a drunken Jackie Gleason and a splenetic Frank Sinatra, and learns of the Soviet Union's second detonation of a nuclear bomb. It's an absolutely thrilling literary moment. When Bobby Thomson hits Branca's pitch into the outstretched hand of Cotter--the "shot heard around the world"--and Jackie Gleason pukes on Sinatra's shoes, the events of the next few decades are set in motion, all threaded together by the baseball as it passes from hand to hand.

"It's all falling indelibly into the past," writes DeLillo, a past that he carefully recalls and reconstructs with acute grace. Jump from Giants Stadium to the Nevada desert in 1992, where Nick Shay, who now owns the baseball, reunites with the artist Kara Sax. They had been brief and unlikely lovers 40 years before, and it is largely through the events, spinoffs, and coincidental encounters of their pasts that DeLillo filters the Cold War experience. He believes that "global events may alter how we live in the smallest ways," and as the book steps back in time to 1951, over the following 800-odd pages, we see just how those events alter lives. This reverse narrative allows the author to strip away the detritus of history and pop culture until we get to the story's pure elements: the bomb, the baseball, and the Bronx. In an epilogue as breathless and stunning as the prologue, DeLillo fast-forwards to a near future in which ruthless capitalism, the Internet, and a new, hushed faith have replaced the Cold War's blend of dread and euphoria.

Through fragments and interlaced stories--including those of highway killers, artists, celebrities, conspiracists, gangsters, nuns, and sundry others--DeLillo creates a fragile web of connected experience, a communal Zeitgeist that encompasses the messy whole of five decades of American life, wonderfully distilled.

On October 3, 1951, there occurred two "shots heard round the world"?Bobby Thomson's last-minute homer, which sent the N.Y. Giants into the World Series, and a Soviet atomic bomb test. The fallout from these two events provides the nexus for this sagalike rumination on the last 50 years of American cultural history. DeLillo's opening depiction of the scene at the N.Y. Polo Grounds that day is masterly. Unfortunately, sustaining the initial brilliance proves difficult. There are some marvelously drawn characters?Sister Edgar, a vision-seeking nun of the old school; Ismael, a ghetto-based graffiti artist and budding capitalist; J. Edgar Hoover?and thought-provoking ideas, e.g., waste as the cornerstone of civilization and the power of remembered images lurking just beneath the surface of our minds. But somehow the various parts of the story seem more satisfying than the whole. DeLillo is one of our most gifted contemporary authors whose works belong in all academic and public libraries, yet one suspects that his truly "great" novel is yet to come.

The Hen Who Dreamed She Could Fly

Coraline and Other Stories: The Bloomsbury Phantastics

Love on the Brain: From the bestselling author of The Love Hypothesis

The Inexplicable Logic of My Life